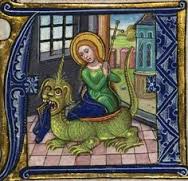 During a recent trip to London I was excited to come across an incredible altarpiece in the Victoria & Albert Museum, one of London's most magnificent museums. This intricately carved altarpiece tells the story of Saint Margaret, martyred for refusing to renounce Christianity. 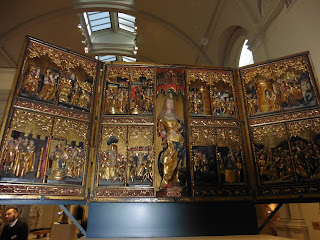 Famous for her imprisonments, and subject to tortures for her Christian commitment before finally being beheaded, Saint Margaret's most remarkable imprisonment was within the belly of a dragon. The wooden cross she held so tickled the dragon’s insides that he belched her forth. She is thus often depicted subduing a dragon and is the patron saint of childbirth. 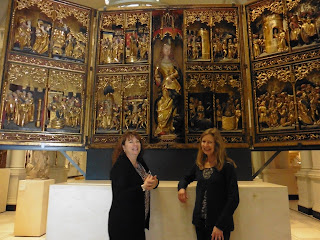 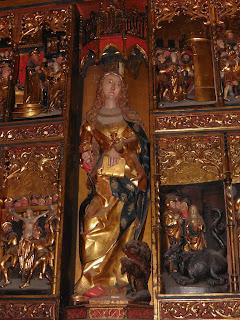 In the enigma of the bone-sculpted angel that links the generations of women throughout The Bone Angel trilogy, Saint Margaret and her story feature in Blood Rose Angel, 3rd novel in the trilogy.

Our hoods pulled snug around our faces, extra blankets shrouding our cloaks, Morgane and I sat on a snow-shrouded log in the misty garden.
‘I’ve told you of Saint Margaret,’ I began.
Morgane nodded. ‘The one we pray to for a safe birth.’
‘That’s right, my sweet. Well, it’s said Saint Margaret was the daughter of a pagan priest of Antioch.’
‘Antioch?’
‘A place in Pisidia … a far-off land across the sea, where Margaret turned into a Christian, which made her father drive her from their home. She became a shepherdess and there was a Roman prefect called Olybrius who found her very beautiful.’
‘What’s a prefect, Maman?’
‘A very important person in the times of the mighty Romans. Remember the people Papa told you about, who made camp here in Lucie-sur-Vionne? Those who built the road that leads to our pool on the Vionne, the crumbling fountain on la place de l’Eglise and the great aqueducts to take water from the hills all the way down to Lyon? The same people who mined for gold in our cave?’

‘Yes, I heard the tale at the Midsummer Eve feast yesteryear. The storyteller told us the Roman slaves cut those caves from the mountains and worked inside the tunnels, searching for gold. They made shrines and vases and jewellery. And used it for coins, too. And that’s how Lucie-sur-Vionne was named,’ she went on. ‘After the Roman soldier, Lucius. Like the villages of Julien-sur-Vionne and Valeria-sur-Vionne too.’
‘Clever girl, you remember everything. So, when Margaret would have nothing to do with Olybrius, he charged her with being a Christian and had her tortured and imprisoned.’
‘A real barbarian, that Olybrius … like horrible Captain Drogan and le Comte, who wanted to burn you at the stake.’
I nodded, trying to block all memory of that dank gaol cell; the terrible burning sentence, from my mind. Our lives since the Spring Fair, in fact. ‘While she was imprisoned, Margaret met the Devil in the form of a dragon, and it swallowed her. But, with the cross she was carrying, Margaret tickled the dragon’s throat and he spewed her out, alive.’
‘Alive?’ Morgane frowned. ‘That sounds impossible.’
‘Well, poppet, it is a legend. But because she was delivered safely from the dragon’s stomach, she’s known as the patron saint of women in childbirth—to deliver babies safely from their mother’s womb. And, to finish the story, after many attempts to kill her, Margaret was finally beheaded.’
‘Poor Margaret.’ 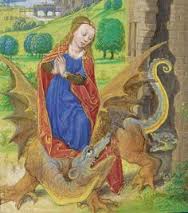 If you liked this post, why don’t you go ahead and sign up for occasional book news and a FREE COPY of the story that inspired The Bone Angel series. Just click on the angel icon.