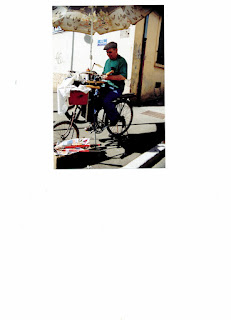 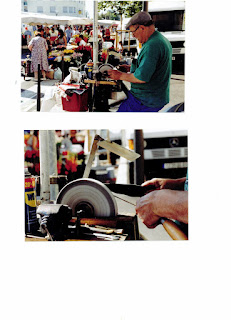 Perhaps because I grew up in Australia, a country with a past so young, I have always been awed by history. Twenty years ago, I moved to a rural French village and found myself steeped in antiquity, age-old culture and monuments. Writing about it became the next logical step.

Surrounded by history certainly gives me ideas for stories, but it is also the local people who provide inspiration for the characters of my historical tales. One such person is Georges, on whom I based Emile, my heroine’s father in Spirit of Lost Angels.

As he has done every Saturday morning for two decades –– so he tells me –– Georges lugs his strange-looking bicycle along to the marketplace. And there he pedals in earnest, all morning, amidst convivial banter, fruit and vegetables still glistening with dew, and boudins and saucissons displayed like plump limbs. But he never leaves his spot.

Curious, I am drawn to this cycling-sur-place, and learn that Georges is a rémouleur, (knife sharpener or grinder), vestige of a French profession dating back to 1300. Exercising his activity in the village streets, the grinder proposed his services to sharpen knives, scissors and razors, as a source of extra income.

‘I’m a carpenter by trade,’ Georges says, not stopping to catch his breath. ‘I had to sharpen my tools, so I taught myself, and adapted my own bicycle,’ he adds, caressing his slate block with a dangerous-looking Opinel.

The rémouleur’s equipment developed over time to become relatively sophisticated but, in the beginning, a simple frame fitted with a heavy sandstone grindstone was used. A wheelbarrow made transportation less tiring. The rémouleur added a water reserve to lubricate the grindstone, then the famous pedal made its debut, permitting him to work the grindstone with his foot.

‘How many kilometres do you cycle in a morning?’ asks a customer, stowing his newly-sharpened Swiss Army knife between punnets of fleshy raspberries and slices of pâté de campagne.

‘No idea,’ Georges replies, as he wets another blade, and passes it across his revolving grindstone. ‘But I must’ve been around the world twice in twenty years.’ With a rueful smile Georges then says he’s never been out of France.

Five minutes later, the grindstone having completed its work, Georges takes a break from his pedals to work the knife across his slate slab.

‘For the finishing touches,’ he explains, continually lubricating the knife from a pot of water dangling from the handle bars. ‘You see, stroke the bevel against the stone, at right angles, like this,’ Georges demonstrates, manipulating the knife with the same gentleness one would stroke a kitten.

George’s trade lived until the middle of the 20th century until the quality of steel and its treatment meant there was less call for sharpening. Indeed, in today’s technological era, I wonder if Georges truly makes a justifiable contribution to his income. But the continual dribble of customers throughout the morning, at an average of 4 euros per item, answers my question.

As the church bell chimes midday, signalling the end of today’s market, a woman approaches perhaps one of the last members of a profession on the verge of extinction. She draws a large carving knife from folds of lettuce leaves and rhubarb stems.

‘Can I leave this with you?’ she asks.

‘It’s a bit late, come back next week,’ the knife-grinder says with a nonchalant wave of his hand. For Georges is not in a hurry. He may cycle all morning, but he isn’t going anywhere. Just yet.