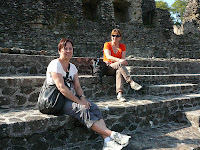 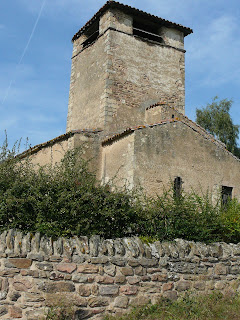 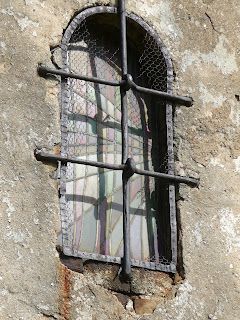 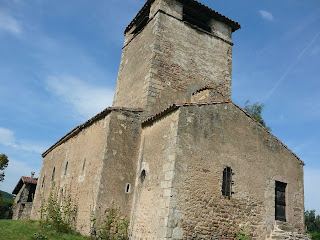 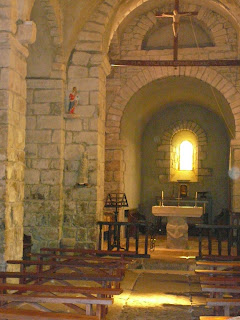 Last Sunday dawned warm and sunny, so we stuffed cheese, saucisson, baguettes and water into the backpack and headed up the track behind the house, into the foothills of the Monts du Lyonnais. After several hours tramping up and down valleys, and through forests, we reached the hamlet of Châteauvieux, with its wide view over the Yzeron valley on one side, and the city of Lyon on the other.
Châteauvieux boasts not only a history dating back to Roman times, but also an 11th century chapel, which was my real motive for our day-long hike. For this medieval edifice seemed the ideal chapel for Angel of Roses – my current novel, set in this rural area west of Lyon during the 14th century plague years.
As I peered into the chapel, I felt that twinge of excitement, anticipation and nervousness, when a story starts to come alive. It was as if, in that dim and dusty interior, I could see the villagers hunched on the straw-covered flagstones, the elderly and infirm lined up on benches along the walls, all eyes on the priest. I could hear the priest telling them that Black Death had come to the village because they were all such terrible sinners, and now they must pay for their sins, and repent. And, from her glorious pedestal, I shivered at the implacable stare of the Virgin Mary.
Not a single tombstone is left standing in the cemetery, but as I walked across the grass, the silence broken only by the gentle breeze, it seemed those ancient spirits were still there, crouched in the shadow of the stone walls, watching my every move, guarding their sacred site. I expected to see a wimpled face staring from a cracked, stained-glass window.
‘Who are you?’ she would say. ‘Where do you come from, dressed like that?’
In that instant, I wished for time-travel. I’d have loved to have been in their midst, experiencing their life and times, first-hand. But only for a few hours mind, then buzz me back to the safety of the 21st century, thanks very much!
We left the chapel to its ancient keepers and their secrets, and continued on up the hill towards the village of Yzeron, calling in on some old friends along the way: 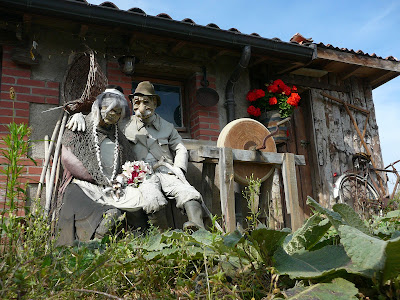 What a wonderful day! Glad your new story is beginning to come alive for you. Thanks for sharing the photos.

Thanks, Julianne. I hope I'll be able to share the actual story in the near future!

Loved this post, Liza. Your writing style is so beautiful and I hope to imitate you someday!

Loved this post, Liza. Your writing style is so beautiful and I hope to imitate you someday!

Thanks so much, Mary! You are too kind.

I got goose bumps just looking at that chapel.

Yes, Marie, a bit of a spooky place!