A warm late summer day, a good buddy visiting from overseas ... what more could entice me to a day off from work, writing and the screen? It was also a good opportunity to discover Lyon's innovative and practical bike service: Vélo'v.


The tourist office on Lyon's Place Bellecour provided us with a detailed map of the cycle paths, as well as simple instructions on how to use the system. 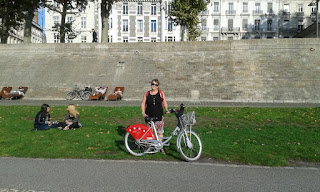 We followed the Rhône River bank from Place Bellecour up to the Parc de le tête d'Or (Park of the Golden Head), Lyon's largest urban park, featuring a lake, a zoo and sports facilities. 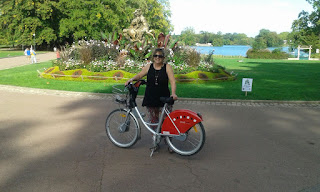 Basking in the September warmth, and unencombered by weekend crowds and noise, and toddlers weaving on trikes, we cycled around the lake and the beautiful rose garden, stopping for a refreshing Perrier-citron along the way. 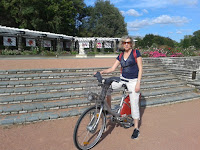 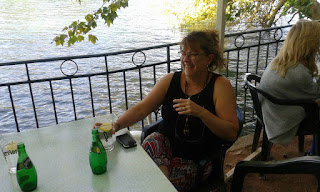 
The Parc de la tête d'Or features in Wolfsangel, the second novel in The Bone Angel Series, set in Nazi-occupied France of WW2, and based on the tragic war crime of Oradour-sur-Glane.

Wolfsangel Extract...
Arm in arm, with the casual closeness of young lovers, Pierre and I made our way across the city to Parc de la Tête D’or –– Lyon’s grandest park.

We strolled past the usual long, hungry-looking queue stretching along the pavement from a grocery shop, slipping our leaflets into their shopping baskets –– news-sheets informing them that our food shortages were not caused, as the Germans would have us believe, by the British blockade, but the consequence of their systematic plundering of our reserves.

‘No, but I have two KCs,’ she replied, which were for pregnant women and hard labourers. ‘But what labour isn’t hard these days?’ she went on. ‘When we’re forced to eat rutabagas instead of potatoes, and when you have to sleep with the fishmonger to get even a carp’s head?’

‘It’s shameful, shameful,’ said another. ‘When we have to pay twenty-seven francs for a paltry nub of butter and that you can only get on the black market.’

‘Oh yes, it’s fine for people with money, but for the rest of us …’

Pierre and I entered the park via the enormous gilded wrought iron gate, the scent of fairy floss and crepes filling my nostrils, the clear laughter of children tinkling on the spring air.

We bent our heads close, smiling at something the other had said, squirrels darting across our paths and up tree trunks as we headed past the deer park towards the puppet theatre. After all what could be more innocent than a young couple enjoying the puppet show in a public park?

I kept running over Jacqueline’s instructions in my mind: identify the contact –– Jeanine — who would hand me a batch of Michelin maps with notes on reception centres for those evading compulsory labour service. Pierre and I would then make a roundabout circuit along the park’s maze of alleyways and transfer the maps to Antoine, waiting for us beside the pier of the lake. Antoine was then to cycle up north somewhere, to hand the maps over to the next contact.

At the puppet theatre we purchased a bag of caramelised peanuts and sat at the end of a row, leaving one vacant seat next to me, on which I placed my bag. We didn’t glance across at the group of Germans lounging in the back row smoking and laughing their throaty cackles. And we ignored the militia, cradling their guns and eyeing the crowd suspiciously.

The contact was late. I kept nudging Pierre, who stole peeks at his watch. Our instructions were clear –– wait five minutes at the rendezvous, then leave. Come back the following day. If the contact still doesn’t turn up, they’ve probably been arrested.

Four minutes and fifty seconds. We were about to leave when I glimpsed the corner of a pink handkerchief poking from a woman’s jacket pocket.

‘Is this seat free?’ she asked me.

I nodded, making no sign of recognition, and shifted my bag onto my lap.

The woman placed her bag on her lap as Guignol, the main puppet show character whose courage and generosity always triumphed over evil, bounced onto the scene.

The audience laughed and clapped as Gnafron, the wine-loving cobbler, started beating the ugly Gendarme Flagéolot over the head. I thought of those Vichy-collaborating gendarmes, certain the irony of that innocent scenario wasn’t lost on the other spectators either.

My eyes still on the stage, I took the maps from beneath Jeanine’s bag and slid them into the bag of caramelised nuts, which Pierre and I continued to share.

The audience applauded long and hard as Guignol, his wife Madelon, and the other puppets took a bow. Everybody started getting up and leaving their seats. Without a backward glance, Jeanine vanished into the crowd. That part, at least, had been easy.

The afternoon sun warming our cheeks, Pierre and I strolled away from the puppet theatre, and on past the zoo, amidst the chatting, smiling public of Lyon. Antoine was due in five minutes.

Gently swaying rowboats, filled with couples, or families, spotted the lake. Birds sang from the treetops and small dogs barked, held tightly on leads close to their owner’s heels. Everybody seemed in good spirits, out enjoying a sunny spring day.

‘Back in a minute, Pierre.’ I gestured towards the toilet block and left Pierre negotiating a price with the boat rental man.

As I entered the public toilets, I glimpsed Antoine’s raggedy dark hair as he approached, but took not the slightest notice of him.

Minutes later, as I went to walk out of the building, a metallic glint in the sun’s reflection stopped me. I caught the flash of dark uniform and the gleam of black boots. Militia. I shrank back out of sight.

I caught my breath and peered around the entrance. Their guns drawn, four militiamen had surrounded Pierre and Antoine. I clamped a hand over my mouth to stop myself crying out.

I grasped at the tangle of threads; at each possible, different strand, trying to understand how it had gone wrong; how the militia had known. Had they seen me with Pierre? Why then, hadn’t they arrested me too? Or perhaps they’d only caught the boys at handover, when Antoine picked up the bag of nuts? I was certain nobody had noticed or suspected Pierre and me when I took the maps from the contact, but perhaps Jeanine was the informer. In such a perilous game, no one could be certain of trustworthy players.

I peered around the doorway again. One of the militiamen was waving the Michelin maps and shouting something at Pierre and Antoine. The others clamped handcuffs about the boys’ wrists and shoved them forwards, the guns trained on their backs. I didn’t dare glance at my friends as the militia led them away.

I stumbled across to the sink and splashed cold water on my face. Thankfully I was alone and I leaned against the wall, breathing hard to settle my sprinting heart and order my thoughts.

With damp and quivering hands, I tucked my shirt back into my trousers and turned to walk out. A tall figure, shadowing the doorway, barred my way.

‘Martin!’ The blood ran cool in my veins. ‘W-what are you doing here?’

If you'd like to learn about the origin of the bone-sculpted angel pendant that links the generations of women in The Bone Angel Series, the Ebook of number 3 in the series is now available for pre-order on Amazon and Smashwords.

If you fancy winning a paperback copy of Book 1 in The Bone Angel Series, enter my current Goodreads Giveaway. 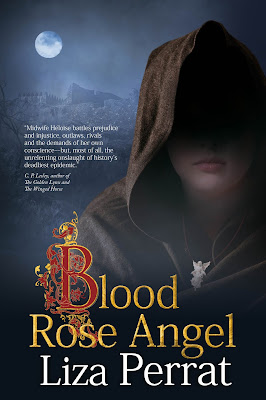