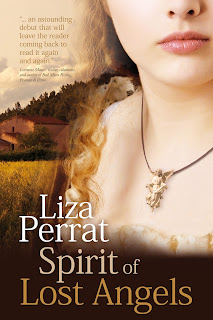 Spirit of Lost Angels, the first (standalone) novel in my French trilogy, The Bone Angel series, is on Kindle Countdown Promotion for only 99c/p on amazon.com and amazon.co.uk  until Saturday 27th May.

Her mother executed for witchcraft, her father dead at the hand of a noble, Victoire Charpentier vows to rise above her poor peasant roots.

Forced to leave her village of Lucie-sur-Vionne for domestic work in Paris, Victoire suffers gruesome abuse under the ancien régime. Can she muster the bravery and skill to join the revolutionary force gripping France, and overthrow the corrupt, diabolical aristocracy?

Spirit of Lost Angels traces the journey of an angel talisman passed down through generations. The women of The Bone Angel series face tragedy and betrayal in a world where their gift can be their curse. Amidst the tumult of revolutionary France, this is a story of courage, hope and love.


Maman lit a candle and handed around bits of cloth for us to dry off. Papa pushed the sheep behind the partition, with the chickens.

My father’s brow creased as he rushed outside, and back in again.
‘Mathilde, the oak’s on fire!’ he shouted at my mother. ‘The lightning must have struck it.’ His eyes grew as wild as the madwoman who lived in the woods––the witch they forbade us to approach.
‘We’ll get water from the river to put it out?’ Grégoire said.
‘Not a chance, my son,’ Papa said. ‘The flames have taken hold. We can only pray to God the fire dies out on its own.’
Maman gripped my father’s arm. ‘Let us all pray then, Emile.’
Our heads bent, we huddled together in silence. I knew fire was the most frightening thing of all; worse than the sickness that ate your face away, or the one that made you cough blood. Lightning fires had destroyed whole villages.
Outside, the trees moaned as the wind whistled through the woods, but the rain had slowed. The twins were bored with the praying and scampered over to pet the sheep.
My father frowned, and stroked his chin; my mother fiddled with her cap.
Wood cracked, and splintered. Maman and Papa glanced at each other.


‘Leave the sheep, Félicité, Félix,’ Maman said. ‘Come here to me.’ I could tell she was worried but my little brother and sister didn’t listen to her, and kept tugging on the wool.
A great roar and a rush of air made my ears pop, as the oak tree crashed through the roof, right on top of the sheep and chickens.
Maman screamed and threw herself at the fallen tree.
‘Run, children, go!’ Papa said.
Through the noise and the mess, I tried to reach my mother. ‘Maman, Maman!’
I wanted to hold her hand but Papa was pushing me away. ‘Go!’ he said. ‘Go, now!’
Terrified, I stumbled outside with Grégoire. Flames spurted from the roof like great orange fingers reaching for the sky, and inside, my father was still shouting at Maman.
‘Mathilde, we must get out now!’
Papa staggered from the burning cottage, dragging Maman behind him. My mother’s head whipped around as she pulled against him.
‘No, let me go. The twins!’ She dug her nails into Papa’s arm. ‘My babies … must … save my babies!’
Papa pushed her to me but Maman was heavy, and we both fell to the ground. My father ran back inside. Grégoire was brave too, tearing in after Papa, even though smoke was puffing out of the doorway, and from the hole in the roof.
‘No, Grégoire, come back.’ Maman’s voice was faint against the whooshing flames. ‘Emile, are you all right? Have you got the twins?’ she kept saying.
The villagers came running down the slope, shrieking against the noise of the fire––all talking at once so I couldn’t understand what any one of them was saying.
‘… fire start … lightning?’
‘Is everyone out …?’
‘Quick, get water … river!’
‘The will of God … a terrible thing.’
I covered my ears, Père Joffroy’s voice roaring inside my head. ‘Water and fire––embrace those symbols of purification!’
I did not understand how we could embrace a thing that was destroying our home.

Papa and Grégoire staggered outside, clutching their throats and gasping. My father lurched towards Maman, tears rolling down his face. I had never seen him cry, and it frightened me.
Papa was shaking his head and falling into Maman’s arms, but she couldn’t hold him up and he collapsed on the ground.
The rain stopped. The storm was over, but it was hot, so burning hot that the villagers had to drag Papa further and further from the dragon fire that was feasting on our home.
Very quickly, there was nothing left, only the fireplace standing in a mess of black wood, stones and branches. The ground was a carpet of twigs, leaves and small birds, their necks bent, their eyes wide open.
I took my mother’s hand. It was floppy and cold.
‘Where’s Félicité? And Félix?’
Maman did not answer me, and her fingers closed around the talisman she wore on a strip of leather around her neck––a little bone angel carving.