Tomorrow, 8th December, is La Fête des Lumières (Light Festival) in Lyon, emblem of a popular gathering when the people of Lyon share a spirit of solidarity; the spirit of candles burning on windowsills.

Here's a short article I wrote a few years ago, about the history of the light festival. 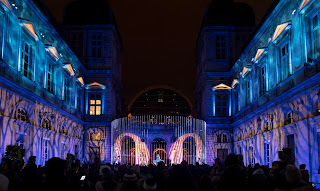 The Plague Enlightened
by Liza Perrat
‘Protect us from famine, war and plague, Seigneur,” cry the residents of Lyon. The year is 1628. But their plea comes too late. The bubonic plague already crossed the Rhône River in August, terrifying the inhabitants and killing half of them.

By 1643 they are desperate, and pray to the Virgin Mary to return good health to Lyon. Miraculously, the black plague disappears from the city, never to return and the people never doubt their divine protection.

So, how does the celebration of the Virgin Mary’s eradication of the plague become the largest light festival of this modern-day century?

It began on September 8th 1852, with the inauguration of the statue of the Virgin Mary, erected on La basilique Notre-Dame de Fourvière to thank her for ridding Lyon of the plague. Severe flooding prevented the festivities from taking place and the event was postponed to December 8th, and the Lyonnaise people showed their gratitude by lighting candles on their windowsills. As the years passed, this spontaneous jest increased in popularity to become, today, a grandiose festival of light.

During the 1980s, in conjunction with the advent of the ‘lighting plan’, the city of Lyon decided to transform the December 8th festival into la Fête Des Lumières (light festival). Each year, the city’s public places would be illuminated in a different fashion, this coloured symphony of light bathing urban Lyon on the eve of the winter solstice.

My first light festival was in 2002. Anticipating large crowds, we opted for the train into Lyon centreville, descending into the cold night at St. Paul station in the Vieux Lyon. Restaurants lining the cobblestone streets blazed with lights, diners’ chatter and busy waiters. Tantalising aromas of frying garlic, butter and parsley mingled with the fog.

Crossing the Saône River we first glimpsed the illuminations on Fourvière Hill, where the Romans set up camp in the first century B.C. and where, atop the hill, Fourvière basilica was built between 1872 and 1884. Lit up in alternate shades of green, blue and violet, the fortress basilica was transformed into a haunted, spectral tower.

On Place des Terreaux, a group threw and swallowed fire for an enchanted audience, ‘ohs’ and ‘aahs’ echoing into the wintry dark as flames leapt dangerously close to the performers. Then the old stones of the square melted into a cinematic screen of stars and moons. Coloured lights and shapes danced on a stage of renaissance architecture, a bloodied revolutionary soldier crept stealthily across the starry sky, and all sense of dimension was lost.

At the old printing museum, high on an old stone staircase, children were mesmerised by a mediaeval play of sword–slashing and fierce shouting.

‘The very identity of Lyon is revealed in the light festival,’ said the mayor, ‘through an event that is both a popular event and a tribute to art and architecture through the use of light.

On the stone floor of the Trinity Chapel in Lyon’s 2nd district, 2,000 white glass jars filled with water and blazing oil were distributed in wave forms to create the Equinoctial tide. French baroque music interpreted by three sopranos and an organ accompanied the lighting and extinction of the fires.

The city’s ancient weaving industry and textile production were revived through light projections onto the imposing St Jean Cathedral, invoking the weavers’ mechanisms and gestures. To complete the picture, a green laser beam linked St. Jean Cathedral to Fourvière Basilica.

Since its origin in the XIX century, December 8 has taken on an undeniably futuristic allure. But despite these magnificent illuminations, the Lyonnaise people never forget that the soul of the light festival remains within the beauty of thousands of tiny candle flames burning in unison, on windowsills. 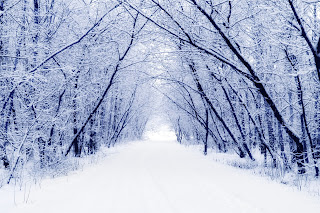 So, since our rural village is located on the outskirts of Lyon, I’d better hunt out those candles and holders, ready for tomorrow!
To celebrate this year's light festival, I’m reducing the price of my black plague novel, Blood Rose Angel for a few days to only 99c/p. 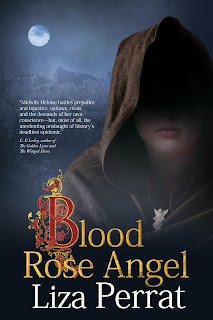 1348. As Bubonic Plague makes its first inroads into Europe, medicine, religion, family traditions and love intertwine in a woman’s search for identity and her battle to heal the sick in a world ruled by superstition.
Get your copy of Blood Rose Angel HERE.

http://www.lizaperrat.com/
Posted by Liza Perrat at 06:04 No comments:

Wolfsangel my WW2 French Resistance novel is on sale for only 99c/p for the next few days. 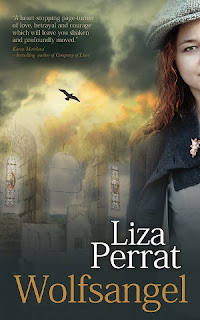 A heart-stopping page-turner of love, betrayal and courage which will leave you shaken and profoundly moved.’ … Karen Maitland. Bestselling author of Company of Liars.
Shortlisted: Exeter Novel Prize 2019:' … great pace … moments of high emotion, a pronounced sense of community and a solid sense of place. Engaging and well researched, this is an ambitious novel …' Broo Doherty Literary Agent, DHH Literary Agency
Posted by Liza Perrat at 23:00 No comments: